Accessibility links
Arab Americans Advocate For Little Arabia Designation In Anaheim, Calif. Members of the community in Anaheim have been advocating for an official designation of the vibrant district for more than a decade. But the city council has been reluctant to support the efforts. 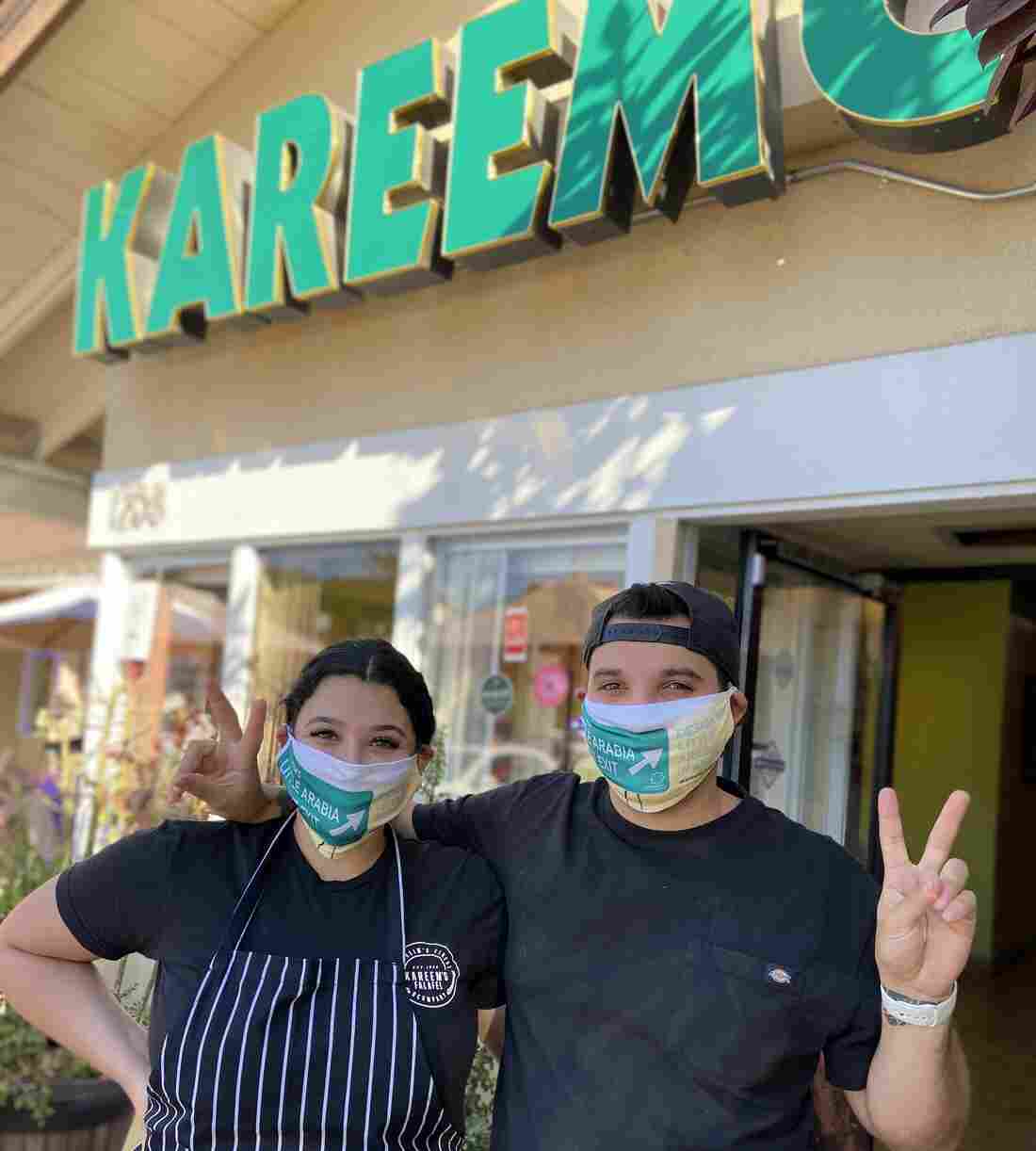 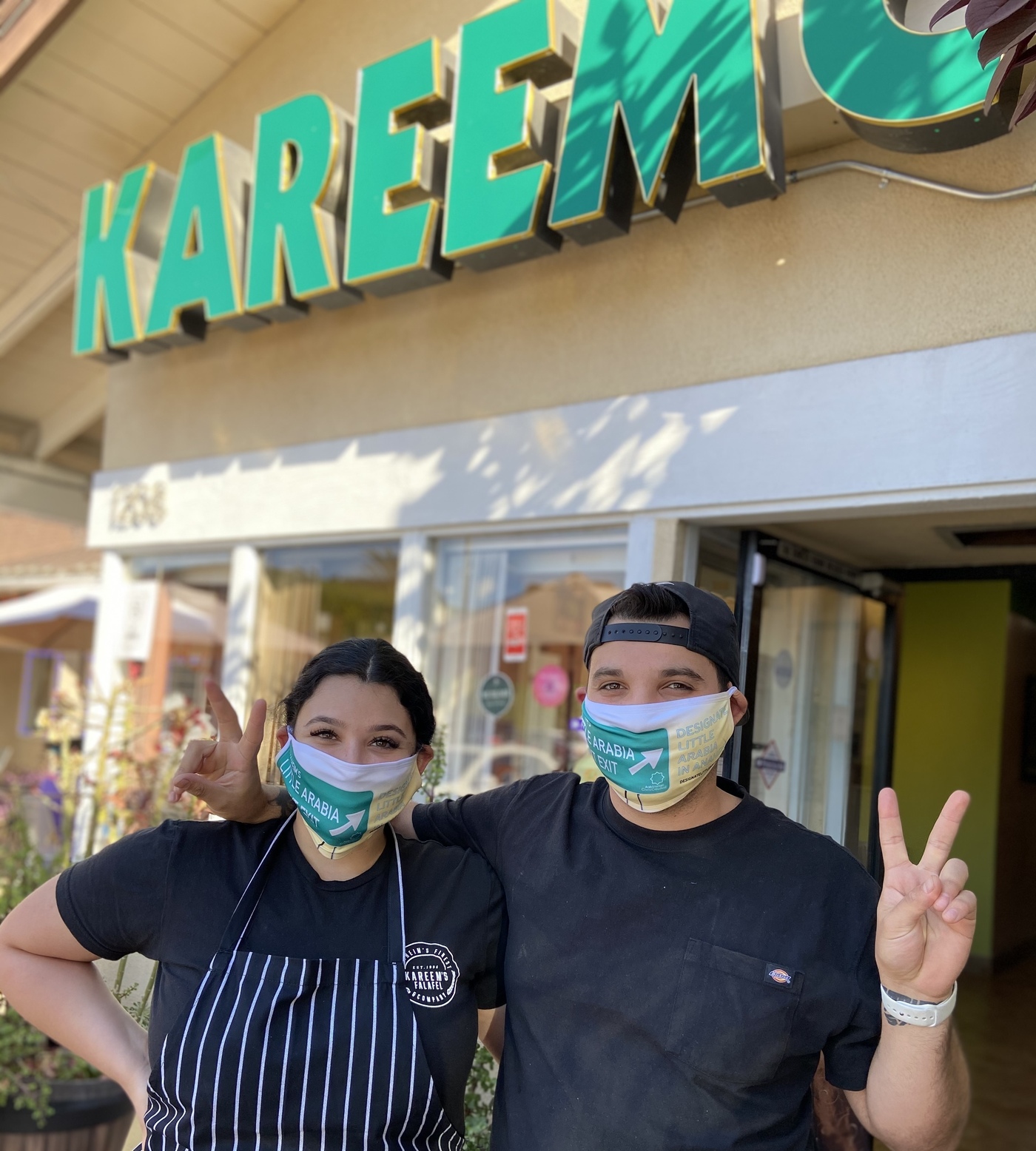 Kareem Hawari, and his sister, Nora Hawari, have been operating Kareem's Falafel throughout the COVID-19 pandemic.

Kareem Hawari, 24, was born and raised in a district of Anaheim, Calif., informally known as Little Arabia.

That's where he and his sisters own and operate Kareem's Falafel, a small restaurant he took over full-time in 2014, after his father died in 2012. Hawari, who was born mere months after the opening of Kareem's, is named after the restaurant and grew up learning how to cook there.

"You would just be sitting down inside the kitchen and we would all just watch our parents cook," Hawari says.

Kareem's Falafel was one of the first Arabic, and specifically Palestinian, restaurants to open on Brookhurst Street in Anaheim 1996, according to Hawari.

Little Arabia, which takes up a few scattered blocks in the city, mainly around Brookhurst Street, has become a community hub for Arab Americans in Orange County, mostly, but also from across the state. California has the largest population of Arab Americans in the country, according to the Arab American Institute.

Hawari grew up feeling close to the area and has witnessed its development. He remembers it starting with mainly Lebanese and Palestinian cuisines and growing to what it is now: a close-knit community and "a melting pot" of cultures from Syria, Yemen, and other countries too. 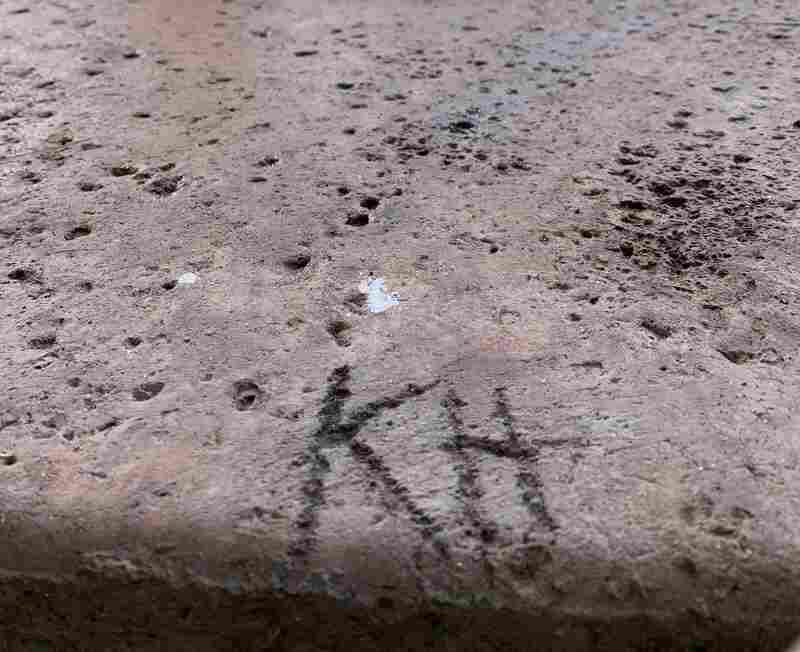 Hawari's initials on a sidewalk in what is known informally as "Little Arabia." Kareem Hawari/Kareem's Falafel hide caption 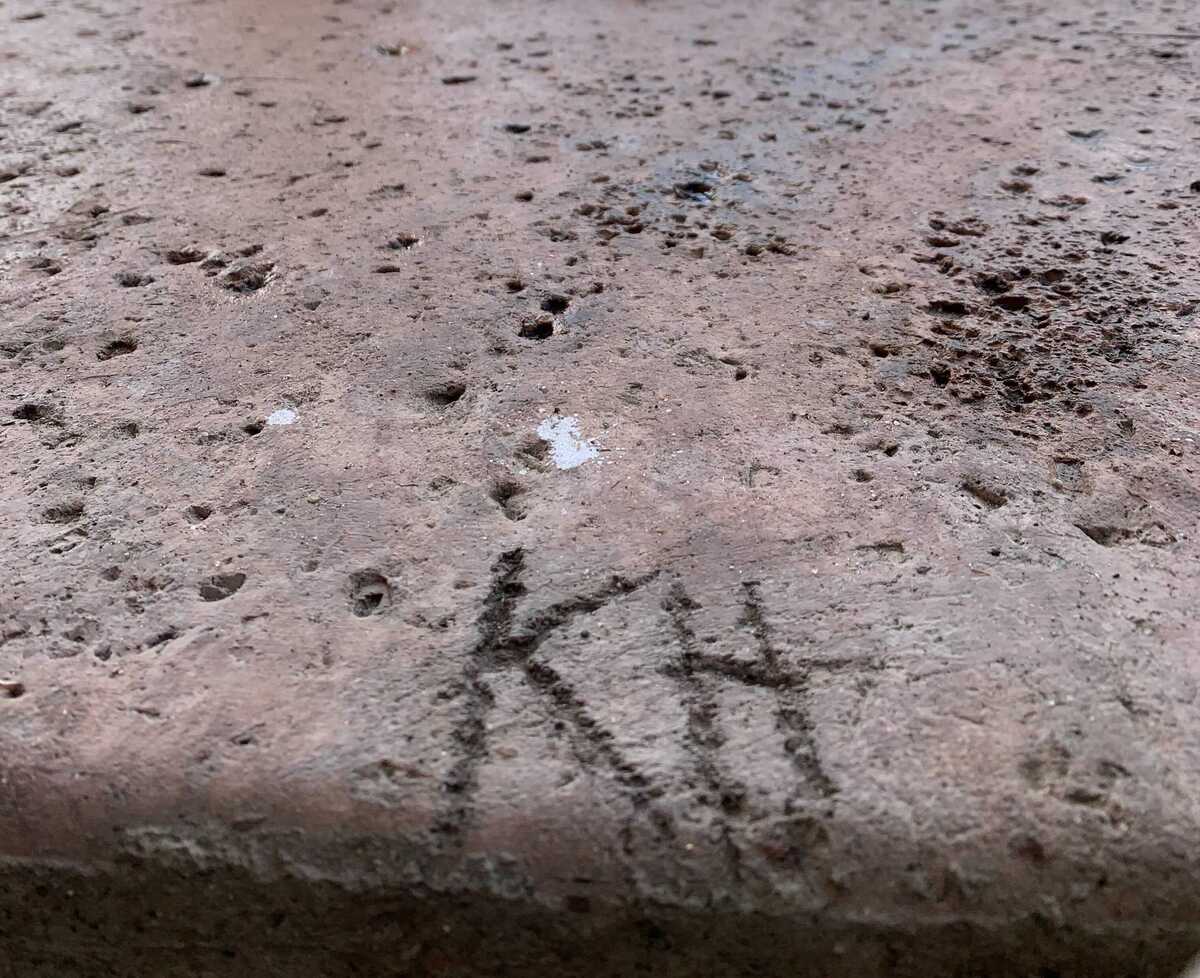 Hawari's initials on a sidewalk in what is known informally as "Little Arabia."

But the area, centered around Brookhurst Street, is not officially designated as Little Arabia by the city. For more than a decade, members of the Arab American community in Anaheim have been advocating to change that. The city council, however, has been reluctant, at least publicly, to discuss the efforts. Just one council member, Jose Moreno, has been willing to discuss the matter on the floor.

"While not in my district, I'm advocating for it [Little Arabia] to be recognized formally," Moreno says. "In that way, you properly validate the work people have put into creating a positive cultural space."

The Arab American Civic Council, based in southern California is now reviving its efforts to promote the area and save local businesses from financial ruin during the pandemic. Arab American advocates, business owners, and many community members see the designation as a way to acknowledge the community's economic and cultural contributions to the city.

"We've sort of built this community around good food and hospitality," Hawari says. "They've known us since we were children and we've had a lot of customers who were children and they're now adults, bringing their kids."

In the early 1990s, two entrepreneurs, Ahmad Alam and Bilal Dalati, took advantage of low real-estate costs in the West Anaheim area and leased space to Arab immigrants for homes or businesses, according to research in the Journal of Urban History. Over time, the area transformed from an economically stagnant part of town to a vibrant food destination of Arabic restaurants, bakeries, halal markets, hookah lounges, and community organizations.

Rashad Al-Dabbagh, founder and executive director of the Arab American Civic Council says that the designation could be one of the few ways to help businesses. 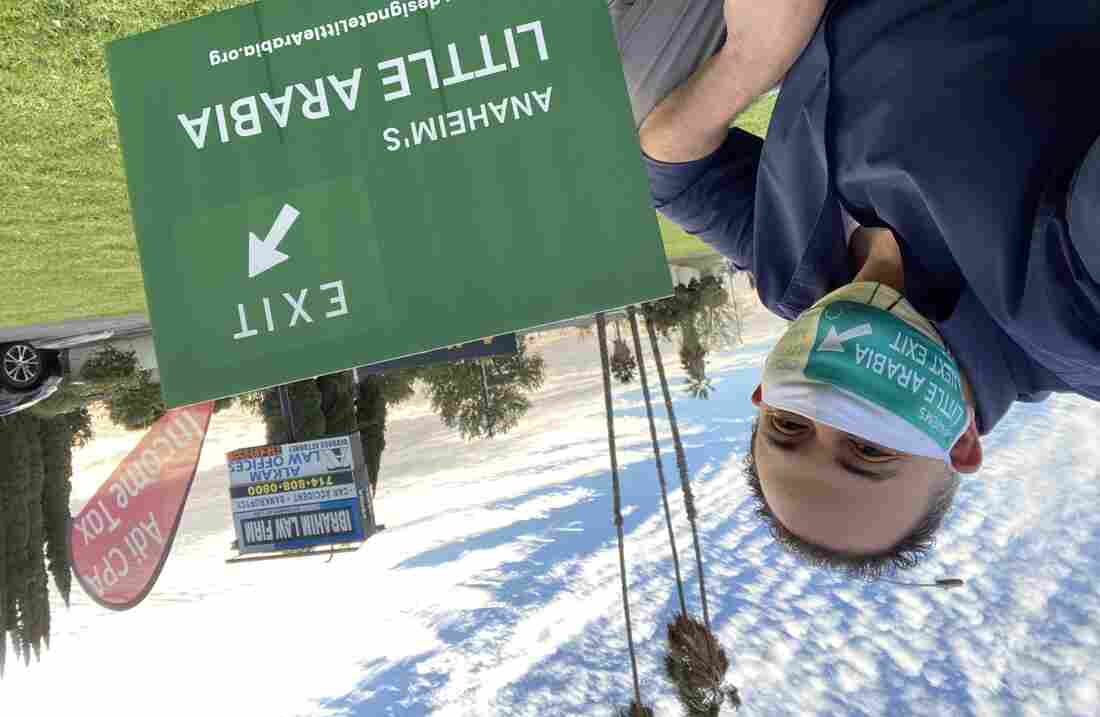 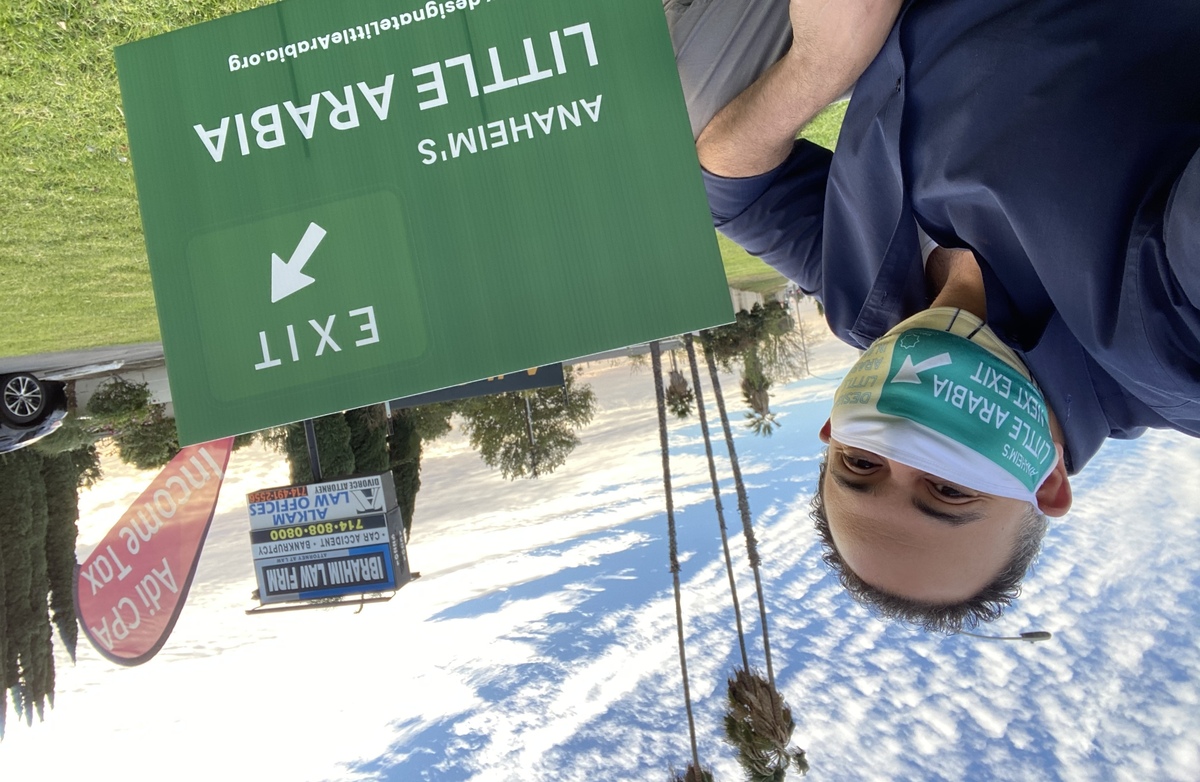 Rashad Al-Dabbagh, founder and executive director of the Arab American Civic Council, next to a lawn sign supporting the designation of Little Arabia

"We have a lot of potential over here"

"Many people do not know that this area is called Little Arabia," Al-Dabbagh says.

He says that a sign on the freeway could bring more attention to the district. "It [the designation] uplifts the business owners, brings more business, creates more visibility of this area," he says.

The Arab American Civic Council has been canvassing Arabic businesses and incorporating their feedback since the latest push started in October 2020. They revamped their social media campaign and created face masks promoting and distributed them to some business owners.

To Ehab Elannan, the designation means much more than just bolstering his business.

"It helps us as business people," says Elannan, the owner of Little Arabia Lebanese Cuisine and Bakery. But more than that, he says, "People will know us much better as a community, that would break the ice between us."

He has a lot of hope for the future of the area, especially because of its proximity to Disneyland.

"We can make this street better than any other street. Not in Anaheim. I'm talking California, because we have a lot of potential over here." 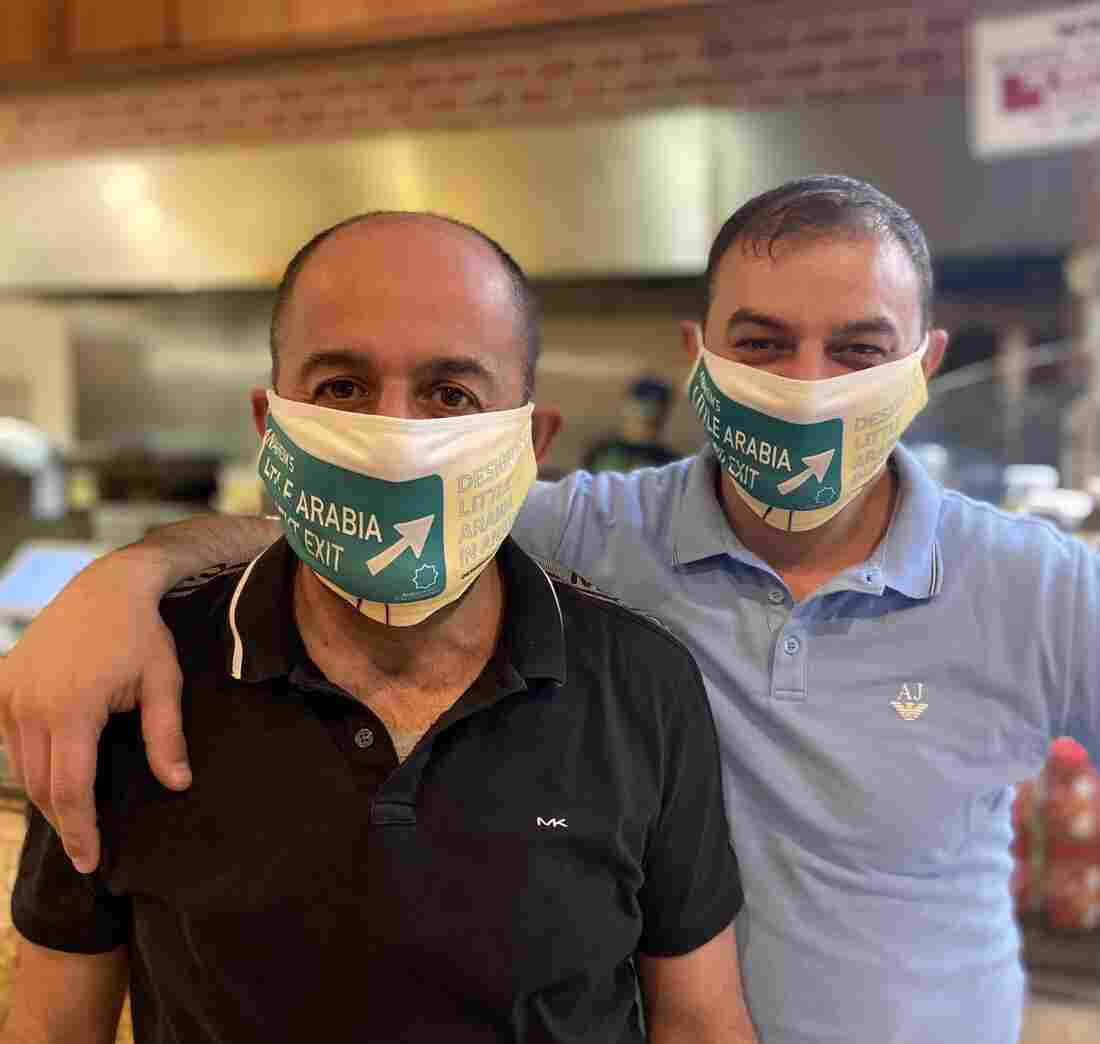 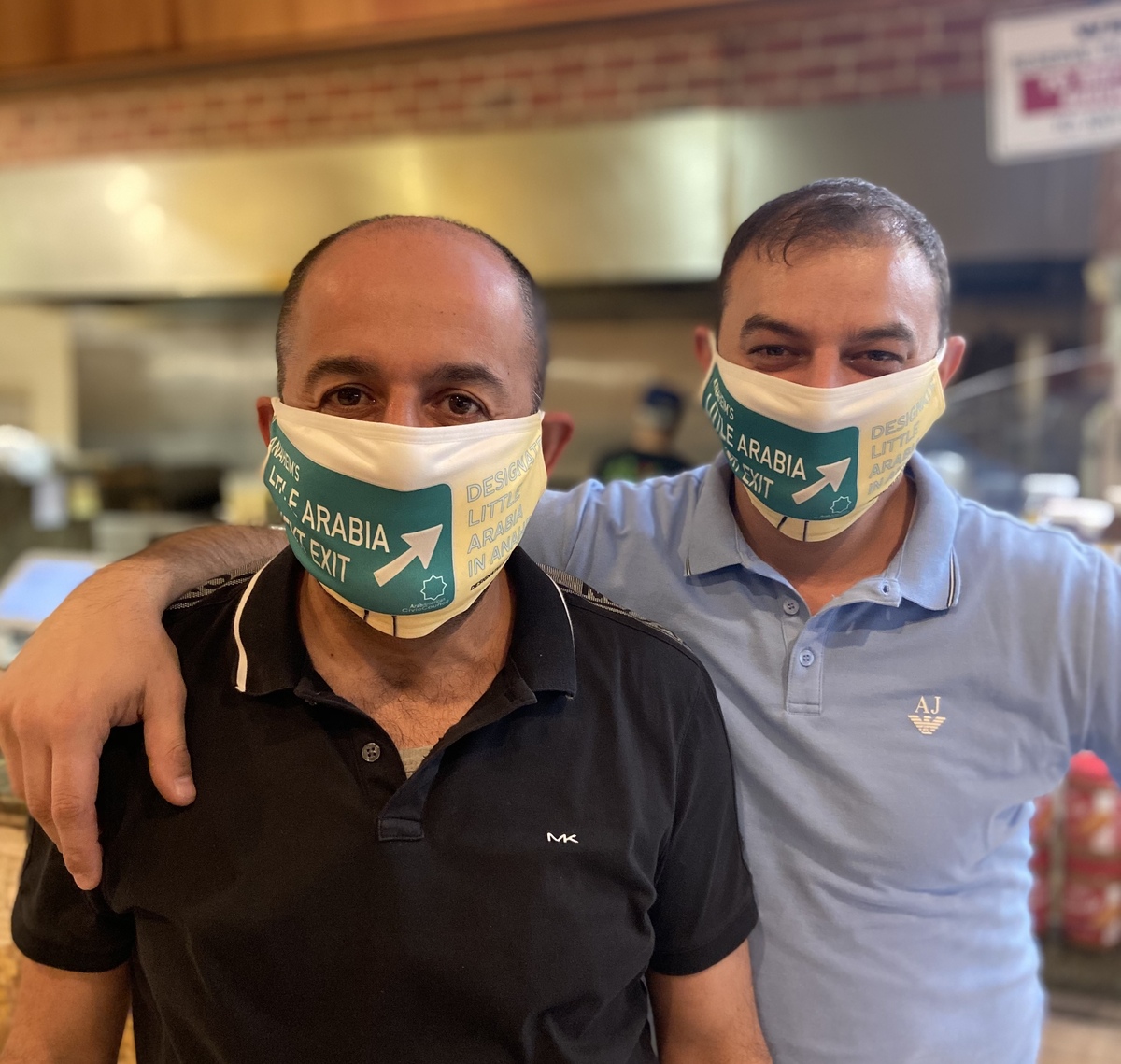 Ehab Elannan (left) the owner of Little Arabia Lebanese Cuisine and Bakery, believes that the designation is crucial to the community.

The city council has been reluctant to consider officially designating Little Arabia. In a statement, Mayor Harry Sidhu said that the city needs to take a "broader, more inclusive view" in regard to official designations.

"The area home to Little Arabia includes a range of people and backgrounds, with Hispanics making up half of the area's population," read the mayor's statement.

"There's also a mix of businesses along Brookhurst Street, and some may not see themselves as part of Little Arabia."

The Arab American Civic Council's recent poll results, however, refute that claim. According to the poll that the organization conducted alongside the U.S. Immigration Policy Center at the University of California San Diego, about 73% of nonwhite polled Anaheim voters answered that they either "support" or "strongly support" an official designation of Little Arabia. Fifty-eight percent of all registered voters reported their support for the cause and about a third of voters answered that they are neither with, nor against the designation.

City council member Moreno, who is Latino, says he tried to get an item related to Little Arabia designation efforts "agendized" for discussion but did not receive a second or a third from other council members, a requirement for any agenda item to make it into the floor.

Moreno says that there are two possible reasons for the lack of support: his proposals often do not get seconded, or some say it could be related to the designation itself.

He also says that he has not heard of a vocal opposition from any constituency in Anaheim. He says that, as of now, the main opposition seems to be Mayor Sidhu and the other council members.

According to the Voice of Orange County, a nonprofit news agency, both council members Jordan Brandman and Stephen Faessel say that they would support an official designation for Little Arabia District in 2016 prior to their election.

Faessel, the mayor pro tempore, says that in this matter, he defers to the mayor's statement, and Brandman — who represents the district where Little Arabia is located — did not respond to an interview request.

Moving forward, Al-Dabbagh says they plan to meet with the Chamber of Commerce soon and will continue their advocacy efforts.

"Sometimes people get confused of what we really want. This is a destination," Al-Dabbagh says.

"This is something that will bring pride to the community, that will bring economic revitalization, will support this community as well as the city as a whole. We're not trying to create this exclusive area."

Amar Al-Shanti, a resident of the area and a college student, shared that growing up in Little Arabia shaped her lived experience as an Arab American.

"It's more than just a business to me. I'm very tied to it at the heart," says Al-Shanti. With her dad's recent passing, she sees the value of the community in Little Arabia now more than ever.

She is not surprised that the designation has been taking this long. "You always expect the worst when it comes to Arab-related things in this country, regardless of how big the scale is," Al-Shanti says.

"I think they deserve more than just being these random people on the street who happen to be from the same ethnic group, but to be designated to be put on the map and recognized." 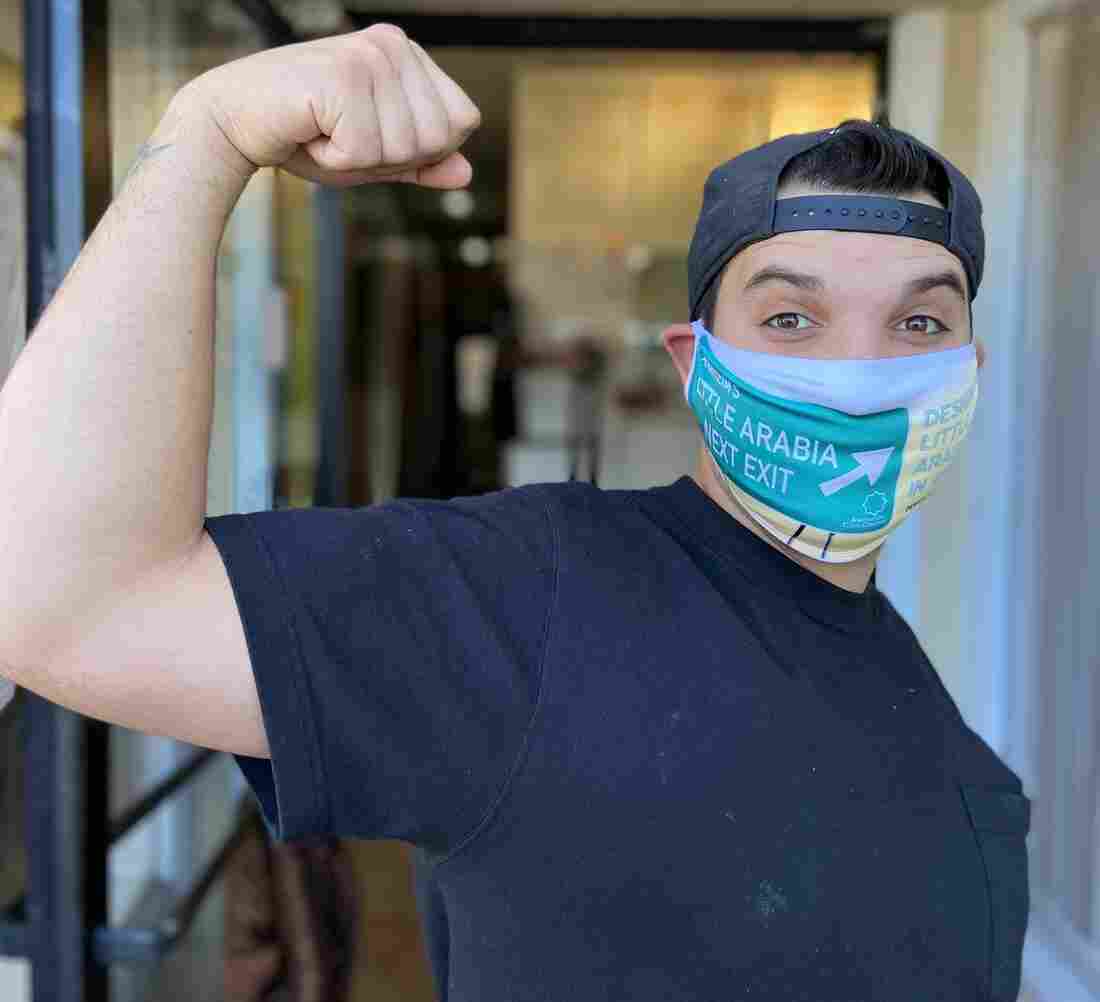 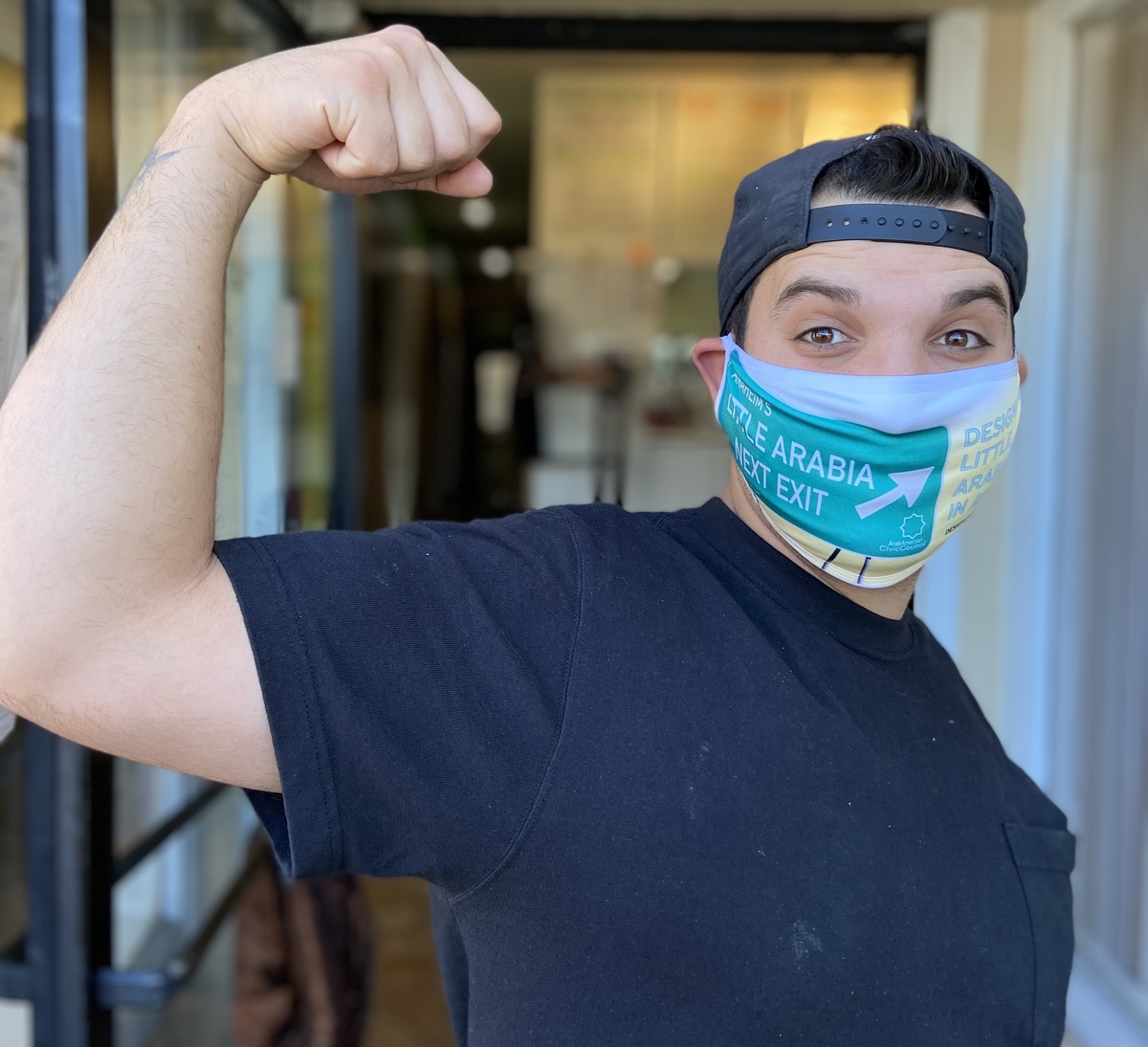 Due to the pandemic, the small businesses in Little Arabia, like many across the country, are heading toward an uncertain future. The pandemic adds a sense of urgency to the issue.

Although Hawari is grateful that Kareem's Falafel is surviving during the pandemic, he hopes that the designation could bring back some of the "upbeat" elements of the area.

"You feel sad about everything, because it was really fun to go around restaurants, but every other restaurant closed so it is kind of just creep," he says.

Little Arabia and the possibility of success of the designation makes him feel proud to be Palestinian American.

As for Rashad Al-Dabbagh of the Arab American Civic Council, the designation of Little Arabia also sends a message.

"Designating this area as Little Arabia is part of that process, is to show that we exist," he says.