Accessibility links
Review: 'Once Upon A Quincea?era,' By Monica Gomez-Hira Monica Gomez-Hira's debut novel follows a Miami teen whose job as a party princess brings her into contact with the ex who ruined her chance to have her own quincea?era — and of course, sparks fly.

'Once Upon A Quincea?era' Has Fairy Tale Charm

'Once Upon A Quincea?era' Has Fairy Tale Charm 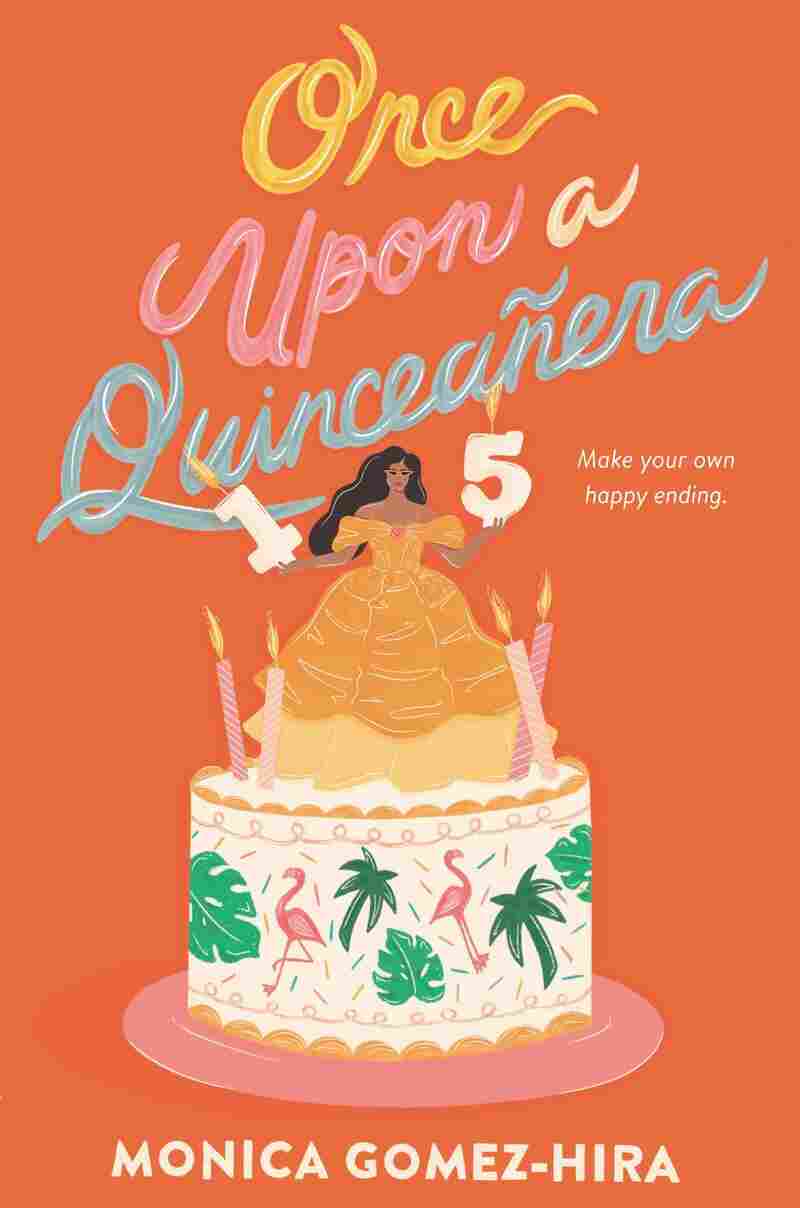 Spring is upon us! (At least, it is where I live in Florida.) Flowers are exploding everywhere, afternoons are stormy, and birds are twitterpated. It's the perfect time to launch a story that centers around that colorful celebration of the blossoming of womanhood, the quincea?era. I hereby present to you all Monica Gomez-Hira's fabulous debut: Once Upon a Quincea?era!

A quincea?era is a relative of the debutante party, celebrated throughout Latin America when a young girl turns 15. The exact program differs depending on where you are, but almost all quincea?eras include a huge party with a ton of dancing, a fabulous tiara, and an enormous dress.

Once Upon a Quincea?era opens in Miami, the summer after Carmen Aguilar's senior year. Due to an incomplete internship credit, Carmen has yet to graduate high school. So she's working for an event company called Dreams Come True, where she dresses up as a singing, dancing Disney Princess for birthday parties. She's at one of these parties (dressed as Belle) with her best friend Waverly (dressed as Cinderella), when a Beast shows up who is not Carmen's usual partner.

Love May Be 'For Losers,' But This Book Is For Everyone

A Fairy Godmother Gets Her Own Wish In 'Glimpsed'

The young man behind the mask turns out to be Mauro Reyes, the charming, dastardly, and incredibly hot ex-boyfriend whose actions led to the cancellation of Carmen's quince a few years ago. It was at his high school party that Carmen's 12-year-old cousin Ariana got her hands on some alcohol — before posting about it on social media — among other horrible events. Carmen's Mama and her Tía Celia got in a huge fight afterward, and Tía Celia — who was footing the bill for Carmen's own quince — blamed Carmen for everything and pulled the plug on her party, causing a huge rift in the family.

Carmen is still figuring out how to work with Mauro — without losing her temper or her internship — when the owner of Dreams announces that they've been hired to perform at the quincea?era to end all quincea?eras. It will be held at the Biltmore by an affluent family who are connected to a ton of other affluent families in the area. What a great promotional opportunity for the company! The big reveal: The party is for Ariana.

Yes, Carmen's spoiled, bratty younger cousin is having a quincea?era, and the invitation is their mothers' way of healing the rift in the family. Anyone who comes from a family full of drama (hello, friends!) knows that such healing is always easier said than done. It's enough to make Carmen's head spin. After all, when so many bad things happen around you, it's natural to wonder if you yourself are the problem.

Carmen's tale unfolds in a riveting telenovela style that makes Gomez-Hira's book pretty impossible to put down. The family who knows you best also knows how to cut you down the worst, resulting in heated dialogue that at times made me gasp. The same could be said for certain ex-boyfriends, but Mauro's kind efforts prove that he is worthy of our heroine.

The novel's text contains a smattering of basic Spanish throughout, which I found refreshing. Don't worry too much if you don't speak the language; most phrases are translated or understood in context. I gave my own Spanish 101 hindbrain a little pat on the back for only needing the dictionary a couple of times. And if you aren't already familiar with a baile sorpresa, you have a treat waiting for you in Google's search results!

So ... does love triumph in the end? No spoilers, but I did finish the book in tears. The good kind! Fans of the television show Jane the Virgin really will feel right at home here. I officially enjoyed Once Upon a Quincea?era from start to finish. May you do the same!

Alethea Kontis is a voice actress and award-winning author of over 20 books for children and teens.